skip to main | skip to sidebar

While visiting my parents for my Mom's 90th birthday party I noticed my Dad's old Pitt's Special model.  Going with Dad to the flying circle was one of my favorite treats.  Watching him fly that Red and White Pitt's is just one of those great memories.  The plane has always hung in his workshop a never fails to remind me of going to the flying circle and watching him and all his friends flying, dog fights, jets and stunt jobs.  It was great fun!  I think is was a major reason all I ever wanted to do was build and work on airplanes.  We built a Fly Baby and fixed op an L-2 Taylorcraft while I was in High School.  Fifty plus years later as an A and P, Private Pilot, and Aerospace Engineer, I still have the Fly Baby, and 2 other projects.

We were looking for something in his shop in the barn and I asked him when he built the Pitt's, since it just always seemed to be a part of our lives.  He couldn't remember exactly but he always took pictures of models he built and has the pictures all in albums, many albums.

We got to searching and sure enough there was a picture of my older brother David (right) holding the plane in 1951.  Dad's in the middle and uncle Peter, 2 years older than David on the left.

We did some more searching through all Dad's well organized magazines and found an add for the Pitt's on the last page of the January 1951 issue of Model Airplane News.  The add for the McCoy 29 was on the back cover.  The kit was $4.95 but the engine was $11.95.  Dad, a retired cop, always worked part time at a hobby shop so I suspect he at least got a small discount.

The model appears to be one of the few which never crashed.  I think the real hobby is fixing busted planes.  All the paint job on the wings and tail is done with the original decals.  I never realized it was all decals until we got looking at it.  He was thinking he should recover it.  I suspect there aren't many models that old and still so original.  The only change has been to rotate the engine to the outside.  I wondered if it ran better that way or if it's a different McCoy than originally installed.  Engines moved from model to model and had a way of occasionally getting damaged in the dirt, usually at high speed.  Ah the excitement of watching airplane parts flying in all directions, when it's someone else's plane.  The truth is much simpler, the control lines didn't stay tight with the engine facing into the circle.  Turning the engine to the outside solved the problem.

We decided to recreate a couple of the pictures of the Pitt's.  The spiffy shirt is long gone but their current house has  the same shingles as the old one.  The tissue paper is starting to fail but other than the pilot, added some years later, it's all original, and in very good condition.

The day we took these pictures dad was getting ready to start working an a large scale P-40 kit he got in a deal for his P-51 model which the other fellow should enjoy flying as much as dad did.  The P-40 has retracts and all so it should keep him busy for a few days.

I'm glad he still has the Pitt's.  The memories it brings back are treasures. 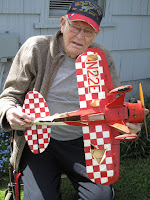 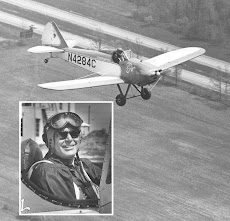 Postings to this are being entered as we do things or have time to write about things we've learned. You'll see the latest entry at the top of the page.
If you're new to this blog you might want to go back and read from the start. There is also a subject index to help you find postings on specific subject areas.
Last things, click on a picture to enlarge it, click the Play > on videos to watch them (they may take a few minutes to load on a slow connection).